In October episode of History of Diplomacy and Technology, we will analyse the beginning of radio and TV broadcasting and how they influenced diplomacy. 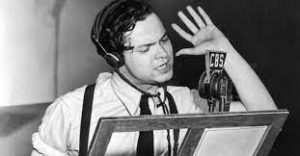 Orson Welles’ radio drama The War of the Worlds was an early example of the power of radio broadcasting. His ‘announcement’ of the start of the war with the Martians created panic in the United States.

Since its invention in 1926, and the beginning of commercial use six years later by the BBC, television has become a main news and entertainment medium. The golden years of television during the 1970s and 1980s saw that  prime-time TV was a new, real-time way of addressing a wide audience and becoming an integral part of their everyday lives. For the first time, we were able to see and hear world news as it happened, and countries and diplomats started using TV as a two-way channel: first as a quick source of information, and second, as a powerful tool for public diplomacy and for conveying their messages.

To see what impact the radio and TV had on shaping public opinion, tune in for our October Masterclass with Jovan Kurbalija: ‘Radio and TV broadcasting: Diplomacy going live’, on October 28th, at 14:00 CET.