Recently, I felt nostalgic and nervous as I was about to revisit my paper from 1996 on digital and diplomacy. Nostalgic of the time when ICTs were pushing new frontiers and carrying a utopian promise of a better world. Nervous about revisiting what I wrote 25 years ago.

On nostalgia, the digital sphere evolved from a space of creativity and innovation to today’s realistic reflection of us and our society. In the 1990s, after the end of the Cold War and the sense that humanity had gotten another chance to ‘get it right’, digital technology emerged as a strong supporter and bearer of hope. It remains to be seen if the utopian vision of the 1990s was misguided and naive. 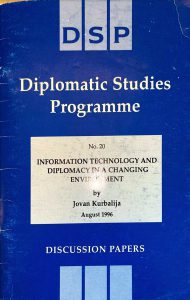 It certainly fueled the growth of a digital space from which entire societies benefited and still benefits from. We saw it during the pandemic when digital networks helped keep societies running. Some benefited much more from this utopia, such as Big Tech companies that became more powerful than some countries combined.

The ‘costs’ of fast digitalisation are well-known: the disintegration of the public debate; hate speech; increased cyber attacks, and the rest. While the cost/benefit debate of digital technologies will continue, I will remain nostalgic of the oft utopian, digital spirit of the 1990s.

As for my nervousness, I was pleasantly surprised to find that my paper is still relevant today. Apart from the retro ICT terminology, the tripartite conceptual framing of the interplay between digital and diplomacy has remained valid after the quarter-century:

This tripartite methodology (environment – topics – tools) for dealing with the intersection of digital and diplomacy has influenced Diplo’s research and teaching over the years. These 25 years teach us one clear lesson: The more you stay with the core functions and purpose of diplomacy, the less likely you are to miss the point of tech-driven changes.

On that note, there is something I clearly missed in my 1996 paper. I did not take developments in AI and machine learning into account. My focus was mainly on rule-based AI systems, expert systems as they were called at the time, that codify procedures in algorithms.

I’d like to invite you to continue this 25-year journey on digital (and) diplomacy together. While re-reading my paper, I added quite a few additional reflections as annotations. Please let me know your comments.

On a final note, inspired by this anniversary, on Tuesday, 7th September, we will revisit the basic question: What are we talking about when we talk about digital (and) diplomacy?

Join us for our event: Digital (and) Diplomacy: What are we actually talking about?